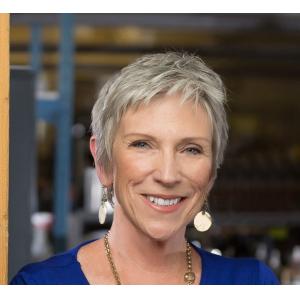 Lillian Burkart
Lillian Burkart ceramic work reflects a connection to earth and fire, love of gardening and a connection to earth tones. Recent works are primarily produced in atmospheric firings, which means driven by primitive, natural techniques to achieve the colorations and depth of her forms and vessels. Organic materials are used in making saggar firings. The stark beauty of black and white in naked raku piece allows placement of the piece in many settings

Artist’s Bio
Lillian’s studio is in Harvard MA where she throws and hand builds pottery. Saggar firings are done in her backyard gardens where summer and winter influences abound. Lillian’s hand crafting skill as a ceramic artist parallel her career as a maker of handmade flutes and piccolos. She is the founder of Burkart Flutes and Piccolos of Shirley, MA. The attention to detail and form of Lillian’s work are reflective of her career in flute making. The rich copper in colorings in her saggar fired work connect her to the warm beauty of rose gold her flutes are made of. 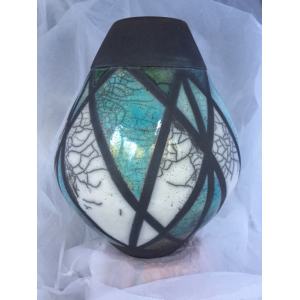 AMERICAN RAKU FIRING with three glazes. During the firing, the glowing hot pot is carefully removed from the kiln and placed in a bed of hardwood shavings which ignite. The piece is smothered in the shavings which creates a reducing atmosphere. Non glazed areas are ‘smoked’ or blackened and the glazes can be manipulated to crackle. 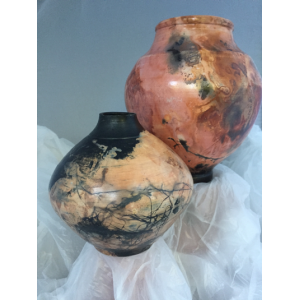 SAGGAR ENCASED BARREL FIRING. This tedious, ancient technic results in a shiny, color rich, unglazed surface finish. The dried, but unfired piece is refined several times by hand burnishing with a smooth stone. Then a solution of the finest clay particles, terra sigillata (Latin meaning Earth Seal), is painted on the piece in several applications. Between each application the piece is hand polished to a shining brilliance. The piece is bisque fired to make it hard. For the second barrel firing, hardwood chips, salts, clay oxides, etc. are wrapped around the piece and entrapped around the pot with aluminum foil.  A second wood burning, slow firing takes place in a barrel or pit.  Smoke and fumes inside the saggar create the beautiful, unglazed surface. 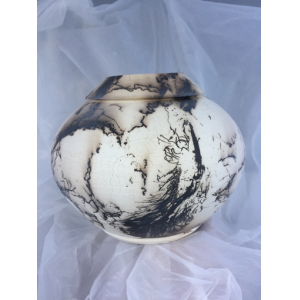 NAKED RAKU. The piece is hand burnished prior to first firing to seal the clay surface and impart luster. Before the second firing a thick slip (wet clay) is applied to the piece and air dried. The piece is then second fired in a raku kiln, removed while red hot and placed in a sealed garbage can filled with wood chips.  During this process the slip cracks, allowing the smoke to penetrate the cracks, creating the desired surface. The still hot pot is quenched in water to release the cracked slip.