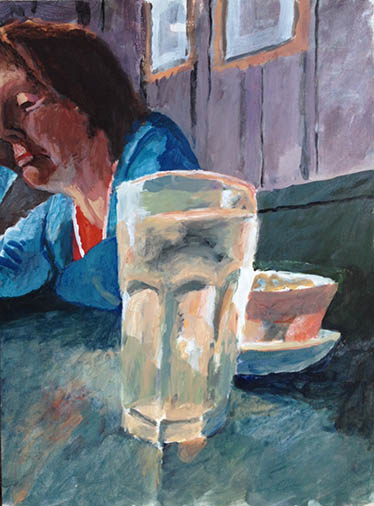 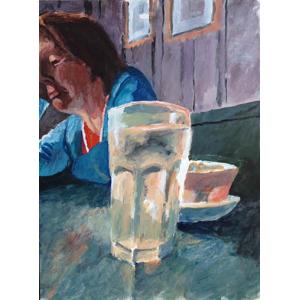 Wife and Husband Team up in Exhibition of Photography and Painting

at Gallery Sitka West in Fitchburg
FITCHBURG, Mass. — Art’s all in the family for Dug and Dawn Haley Morton. Dug is a painter, Dawn a photographer, and their daughter Elizabeth, 9, is already emulating Mom and Dad by creating her own drawings and stories. The painter and the photographer, while working in different media, share a common sensibility in respect to subject matter. They like to depict ordinary moments of day-to-day life that are nevertheless odd, quirky, and occasionally a little frightening.
Dug Morton’s half of the exhibit will feature 19 new paintings. The artist grew up in Groton, Mass., and studied at the Boston Museum School. He has been showing his work in galleries all over New England for almost 30 years and has produced an astounding number of paintings—well over a thousand.
Dug is interested in those rare moments, but from a slightly different perspective. What Dawn might call “rarities,” Dug calls “oddities.” He likes to zero in on peculiar, even slightly unsettling sights, and then strips them down to their basics. The resulting impact, boiled down this way, is very powerful.
A good example is Dug’s painting of a young woman on a stretcher carried by four men. We have no idea what injury she has suffered, and in fact she does not seem to be injured so much as traumatized. She wears an unstained white dress. We don’t see much of the men’s faces. The superficially harmless nature of the men, and the apparent lack of serious danger to the young woman, somehow makes the image more menacing than comforting.
In a similar vein, another picture presents us with a harmless map of the “lower 48,” the continental United States minus Alaska. It looks like an educational game for small children, with the states in effect as pieces of a jigsaw puzzle, each one probably made of wood and connected to a short peg for lifting the piece out of the larger puzzle. But above this we seeing a very dark cloud, and then realize there is a shadow the shape of the cloud covering the map, coast to coast, as it were. All sorts of associations come to mind—foul weather perhaps precipitated by climate change, the future of our children laboring under a dark cloud of grim possibilities. What at first glimpse is a seemingly innocuous children’s toy is, after a second and third look, anything but reassuring. 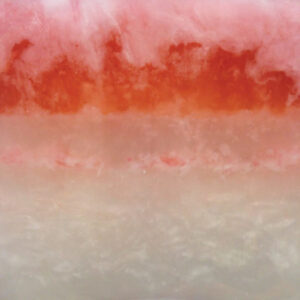 Dawn Haley Morton began taking pictures in the seventh grade with an old 110 camera equipped with a “flip-flash,” graduating to a 35mm camera in the eleventh grade. She has been compulsively taking photos ever since.

Dawn enjoys the excitement of capturing some special aspect of her surroundings, or what she calls “four-leaf clover” moments. She recalls a friend who had a knack for finding four-leaf clovers and other rarities. Dawn delights in finding such curiosities all around her. She considers herself a documentary artist, although the images she captures are not the least bit humdrum. Quite the contrary—these quirky, fleeting moments of discovery are light-hearted and fun but also a bit startling.
One good example is a shot with just enough scary carnival light to pick up the nighttime subject—an assortment of cute stuffed animals. We figure out that these cuddly cuties are prizes at a traveling fair when we take in the red neon sign in capital letters that reads “GUN FUN.” We don’t see the pellet guns that customers might use to “win the little lady a prize,” as the barker might call out. But we can’t help seeing the guns in our imaginations when we get hit (visually) with that noisy sign.
Even a little more horrifying, if in a humorous vein, is a hand-drawn sign presumably at a seaside tackle shop, that reads: “unattended children will be sold as FISH BAIT”. Dawn has several shots on this theme of lovely, soft-hearted scenes that at first conceal something surprising. A close-up of a campfire makes us practically feel the warmth of the red-hot logs and sigh in contentment…until we notice what looks like a bunny on a stick. We can guess the object is candy, but since it’s dark and effectively just a silhouette, we don’t know if there’s someone holding the other end of the stick to “cook” the candy over the fire or whether we’re seeing the moment when the little creature is being consigned to the flames. Either way it strikes the viewer as funny, even if we feel a little ashamed of laughing at it.
Dawn wants to present us with “something that I see that no one else sees.” She refers to this method as a search for “funky” images, “something a little weird” that also makes her smile or laugh. These quirky moments might involve a woman running for a train, a vintage sign that awakens memories from many years ago, or any number of everyday images. “My thing is the emotions,” Dawn says, relishing those moments of discovery that arouse strong feelings of all kinds. Her “focus on people” comes through in both candid shots of the people around her as well as formal portraits.
Dawn majored in Communications and graduated from both Endicott College and Fitchburg State College. She has enjoyed a successful career in media in Boston, and currently works in film and video production at the Massachusetts Institute of Technology (MIT) in Cambridge. She recalls taking a class in video production when she was a senior in high school, getting her started on a career in the field.
She doesn’t miss old-style photography and doesn’t use film anymore. “I had some in the fridge for a long time,” she recalls, but now she works strictly in digital. The current technology allows her to aim and shoot the second she sees a scene that she wants to capture.
The Opening will be held on Saturday, Sept. 16, 3 – 5 p.m., at Gallery Sitka West at 454 Main St. in Fitchburg, Mass. The exhibition will run through Saturday, Oct. 28. Art lovers may visit eclecticdug.com for more information about Dug Morton and his artwork, while checking out Dawn Haley Morton’s photographs at https://www.instagram.com/dawnhaleymorton, her Instagram page.
#     #     #
Share Post: