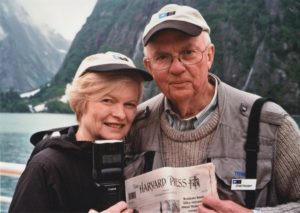 from the Great Northwest at Gallery Sitka East in Shirley

SHIRLEY, Mass. — For Chester and Stephanie Hooper, the art of photography is a family affair. The Hoopers have been taking pictures together since they married 44 years ago. To honor that occasion, Chet gave Stephie a fine Leica M-4 camera for a wedding present. (This complements Chet’s own Leica M-3, which he has had since 1967 and which he still uses today. Chet also used a medium-format Hasselblad.) The Hoopers’ grandsons Lucas (age 12) and Graham (age 9) are aspiring photographers who will have two or three photos of their own in their grandparents’ upcoming exhibition at Gallery Sitka East in Shirley during the month of August.

This show of new work derives from the couple’s recent travels, some photos taken in Bermuda, most taken in the Northwest during a trip organized by the National Geographic Society. Chet and Stephie have captured spectacular landscapes on film on a number of these excursions over the years.

“My grandparents were pioneers who settled in Arizona,” says Stephie, a native of the San Francisco Bay area. Though she and Chet (himself a New Jersey native whose father was a Shirley native) have lived in Central Massachusetts for 10 years, Stephie’s roots are out west. “My great-grandfather was a railroad man,” she continues, indicating in part why she was so excited to go on the National Geographic trip retracing the far western portion of the 1804-06 expedition of Meriwether Lewis and William Clark.

Chet and Stephie and others made their way by ship, with many side excursions in rigid, inflatable boats through what was at the time of the Lewis and Clark expedition called the Oregon Country. It is the region lying west of the immense Louisiana Purchase territory. Their eight-day adventure took them down the Snake and Columbia Rivers all the way to the Pacific.

Lewis and Clark traveled by canoe down these two rivers, descending about 800 vertical feet down to the sea. When the explorers found the going a bit too swift and the water a bit too white, they paddled to shore and carried (or portaged) their canoes and other equipment to stretches of the river where the current was a little slower and safer to ride.

The Columbia now has a very different arrangement with travelers, who go through a series of locks around dams; some of the dams are used for generating electricity. Chet notes that this creates both environmental benefits and costs. “On the one hand, the dams provide electric power without fossil fuels that pollute,” Chet says. On the other hand, he concedes that this human technology complicates the odyssey of the salmon upstream to spawn. “The salmon ‘ladder,’” Chet observes, no longer operates the way Mother Nature had in mind.

The Hoopers were happy to visit Hells Canyon (with no apostrophe, and no relation to Hell’s Kitchen, back east). This 10-mile stretch of the Snake is the deepest river gorge in North America, at a dizzying measurement from top to bottom of the river of almost 8,000 feet. That makes it deeper than the Grand Canyon itself.

Stephie relates that all through the expedition Lewis and Clark were met by many Native Americans, some of whom were eager to aid the explorers and others who were suspicious and angry. The team finally made it to the calm surf of the Pacific Ocean. Because they had to spend a brutal winter there, battling hunger and disease, they named their settlement “Camp Disappointment.” They may also have been crushed that the expedition did not find the storied “Northwest Passage,” a theoretical water route from the Mississippi to the Pacific. Scholars still debate the facts of Lewis’ death, which many presume was the result of suicide in 1809.

Stephie took two shots that document the contrast between eastern Oregon — a relatively arid, desert-like place — and the lush greenery of western Oregon along the coast.

That was the case in Bermuda, where Stephie had “a long wait” to capture an image of one of the island’s loveliest creatures, the long-tailed swallow (or what many refer to simply as “the Bermuda bird”). Her patience paid off, though, and she finally got the shot she was looking for.

Both artists still use film rather than digital format. (Chet shoots black-and-white, while Stephie prefers color.) Graham is even learning darkroom technique from his grandfather, while his brother Lucas shoots digital. (Chet can’t help sometimes calling Graham by his middle name — which is, of course, Chester.)

The “opening” of the show will take place at Gallery Sitka East, 2 Shaker Road, D101, Shirley, Mass., on Saturday, Aug. 17, 3  ̶  5 p.m., although the photographs will be on display the entire month of August. Visit gallerysitka.com for more information about the Hoopers and their photography and this exhibition.