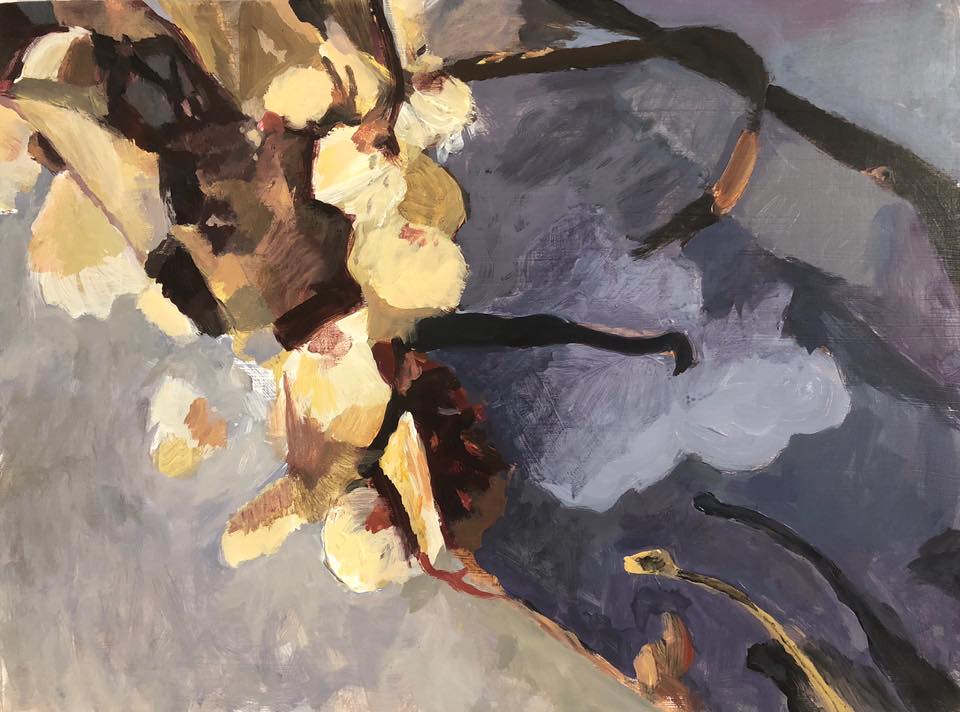 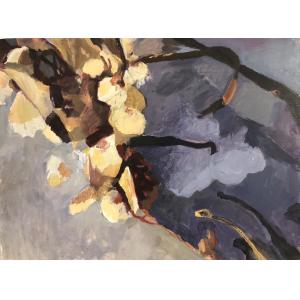 Dug Morton’s paintings are not simply forms of artistic expression, and they certainly are not just illustrations of the world around him. Painting, for him, is not even an “interpretation” of the world he sees. A Dug Morton painting is a dynamic interplay between himself and the constantly changing visual world.

“The world” — that is, critics, art mavens, and the general public — “expects an explanation of a work of art,” says Mr. Morton. “But painting is its own language. And it isn’t at all easy to translate.” The non-linear, non-logical conversation between this deeply intuitive artist and his environment will be on display at Gallery Sitka East in Shirley, Mass. on Saturday, September 21.

All of Dug’s new works in this exhibition are abstract. If they seem to represent recognizable shapes and figures in some ways here and there, the pictures are not really in any sense representational. Take, for example, Dug’s “Belonging.” A viewer would be hard-pressed to find anything that represents commonly observed objects in this painting. There is nothing here like the occasional human face that we might see emerge from some scratches in the wall, arbitrarily dug into the wallpaper by the cat but seeming to leave behind just enough of something like a nose here, two eyes there, creating a facial portrait that somehow looks astonishingly lifelike. “Belonging” shows us instead some lovely, undulating fields of color that pulse and flow. The shapes seem to be moving together, almost “cooperating” in some common project, in order to give the viewer an impression of peace or even good fellowship. But this impression arises not from some visual “copy” of objects in the world, but rather from the abstract relationships among the colors. These include meandering black bands wrapping themselves around roundish, sunny, yellow-white figures that seem to reach out to a sort of stormy field of blue-grey. The feeling produced by the picture has nothing to do with recognizable figures or the telling of a story. The individual viewer can make highly subjective judgments about what the picture might “mean” or simply enjoy experiencing whatever feelings or thoughts are stirred up by gazing at it.

The painting “Dry Your Tears” arguably does represent shapes that distantly resemble a person’s face. A large, red “mouth” seems to sit atop a deep yellow “neck.” Two eyes, so lightly painted that they almost seem not to be there at all, float upward, “captured” by a sort of pompadour of dark cobalt blue. Yet each of these barely recognizable shapes stands alone, as it were, so distinctively and boldly that they don’t appear to have anything to do with each other. These fields of color do not seem to “care” about each other. Each one is a sort of pulse of emotion, bluntly telling the world that it exists in itself and for itself and doesn’t worry much about whether even the painter who is painting them understands them or really knows why he was tempted to paint them in the first place.

Mr. Morton’s “13 Kernel Roller Skate,” by contrast, does not remind the viewer of any ordinary object at all. In fact, the picture seems to have too many, rather than too few, representations of recognizable objects or pieces of objects. At the top are what might be the tops of two theater seats. Below there is what looks like a choppy sea of green, over which floats a blue-green flute or piccolo. In the middle, there is a sort of box that casts a shadow, but a shadow that is so chaotic that one could hardly say that it must be the shadow cast by the box. And finally, the whole (intentionally?) confused mélange seems to have nothing whatever to do with roller skating. In short, the fact that one might see in this picture a few representations of common objects means nothing, because those objects have so little to do with each other. They jangle and clash so much that it makes no sense to try to figure how (or if!) they work together to make a coherent, linear message of some kind. The viewer is better off just letting pure color and form take over and carry him or her off to the artist’s very personal, subjective world.

All these paintings create moods and impressions that Mr. Morton thinks of as “jumping-off points,” the beginnings of thought and emotion rather than some neat-and-tidy conclusion. Dug begins with the “information” he takes in from the world around him and “gives it [his] own spin.” He is emphatically trying to stimulate his viewers’ imaginations rather than deliver the final word about what he observes. He is inviting his viewers to open themselves up to new thoughts and feelings, not to tie up certain feelings with a bow and put them on the shelf.

The artist very definitely sees himself working within a philosophical framework of sorts — namely, “the relationship of the individual to society.” Once again, it is the friction, the attraction, the joy and the desperation between the artist and the world he sees that interests Mr. Morton. Of course, that world is loaded with creatures just like himself, but these members of human society are awfully unpredictable. They can be lovable and frightening by turns, and the receptive artist puts his own happiness and sense of security at risk in the simple act of observing other people. When he takes up his brush in order to express his emotions and his fleeting thoughts in color and form, he is putting himself through the ringer a second time, having started out with simple observation and then subjecting himself to the pains and pleasures of creating art. “I have a visceral experience of what I see and experience in the world,” says Dug. He is an artist pursuing the lonely but exhilarating project of creating a completely unique artistic experience. As Dug puts it, “I’m trying to invent my own world.”

This Artist’s Reception is set for Gallery Sitka East in Shirley, Mass., on Saturday, Sept. 21, 3 – 5 p.m. Art lovers can visit sitkacreations.com and eclecticdug.com for more information about Dug Morton and his artwork.