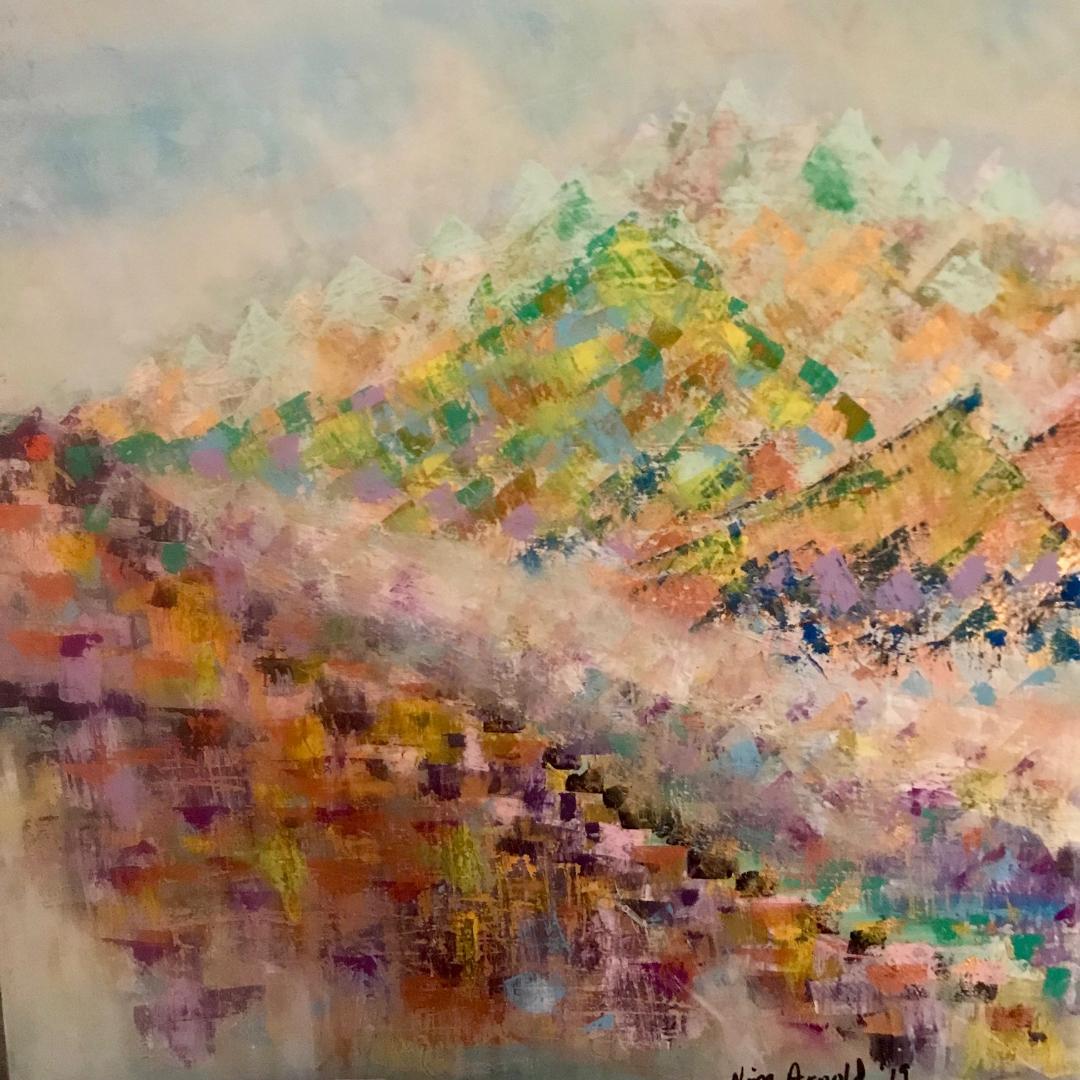 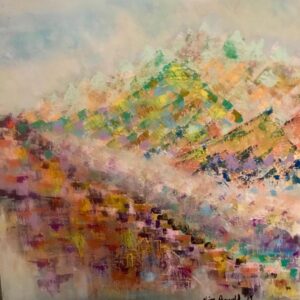 SHIRLEY, Mass. — Nina Arnold wants to surprise you — but not necessarily in a “nice” way. The artist will exhibit refreshingly fun (and, yes, surprising) new works on Saturday, Sept. 28 at the Grand Opening of Gallery Sitka West in Shelburne Falls, Mass.

Nina was born Nina Maneri in Brooklyn, N.Y., and later relocated to Massachusetts where she met and married her husband, Louis Arnold, and raised two children. In her artwork the viewer can perceive both the hubbub of the big city from which she hails and the serene beauty of the New England countryside.

Ms. Arnold has been a photographer since the tender age of seven, a pianist since her teens, and a painter (employing acrylic, gouache, and watercolors, and wielding the brush and the painting knife) for the past three years or so. This remarkably versatile artist is a kind of adventurer of the arts who brings tremendous energy and playfulness to her work. These qualities are evident in several of the paintings booked for the show, especially Nina’s signature “Land Escapes” — not “landscapes,” she explains, “as these paintings are abstract more than realist, using unexpected colors and shapes.”

The artist’s new painting, “Destination,” for example, might strike a viewer as a naturalistic depiction of a dark, wooded hillside throwing its reflection onto a small mountain lake. But the picture seems to be more energized by the painter’s initial impulse than by any classicist attempt to hold a mirror up to nature. The “reflection” of the hillside seems to be expanding, or reaching downward to the bottom of the frame. The hillside itself seems to show the expected forest colors of autumn — yellow, orange, and dark green. But it also suggests something like an explosion, with this small patch of earth blowing up straight into a drab, grey sky. Most inexplicably of all, the hillside sports a line of pinkish squares that could be large panels of some enormous wall. But it also suggests, possibly, a horde of militants on the march, perhaps carrying signs that can be seen (if not read) from far off, and coming straight at us. We cannot even see human figures here, as they are just hinted at. But somehow the feeling is exhilarating and a bit menacing at the same time.

A conventional landscape of this kind would probably strive to represent a peaceful, quiet scene in the Berkshires on a cloudy afternoon in October. But Nina’s picture is anything but restful. Rather, the elements seem to be moving right before our eyes. In an unsettling way, the figures are not lovingly beckoning to us. Instead, they seem to be coming for us.

“Longing” is a similar vista but seen from further away. But even seen from far off it is even more alarming. The autumn colors of red, yellow, and orange have consolidated into an angry clump in the lower center of the canvas. They don’t remind us of any quite, misty, mysterious hillside. Instead, those colors, working together, appear to be an immense, uncontrollable fire. This multitude of flames is no less frightening simply because it’s a few miles away. Its distance from us plays with us. We feel a false sense of security because the fire looks so far away, but it also crackles and hisses so loudly that we have to assume it’s already much closer to us than we thought at first.

“Saturday Night” and “Thursday Afternoon” throw Nina’s intentionally “unexpected colors and shapes” right at us. The sky in “Saturday” might be a depiction of a fireworks display, except that it’s awash in very “wet” blues and greens, punctuated by patches of snowy white. The “forest” below is all kinds of colors, most packed into triangular structures that look more like the roofs of huts than elements of a landscape. It looks more town than country. There are so many of these structures, and they are jammed together so tightly, that they seem to make up a sort of barbaric city — not a quiet forest or a smoggy, modern metropolis, but rather a temporary (but very big) camp of restless, hungry people on the move.

“Thursday” seems to depict a sleepy bog or pond with the occasional bullfrog croaking or cowbird flapping its wings in the water as it takes a bath. But the colors are impossible for such a landscape. Blues and yellows and magentas are at war with unbelievable yellows and pale greens up in the sky. There’s almost the weird quality of the screen of a television from the late ’60s (when color TV was new) flashing gaudy, pop-art streams of color that appear to be flowing off the screen (to the viewer’s right?) in a fuzzy, pulsing, anything-but-high-definition format. We’re supposed to be finding peace and contentment in a wilderness preserve, not some jarring psychedelic experience! Once again, Nina upsets our expectations and keeps us discovering new ways of looking at the world.

“Basement Apartment” brings us momentarily back to town, with huge, 21st-century panes of glass trapped inside unforgiving black window frames that loom over the simple roof of some suburban house that struggles to push up toward the sky. But once again, a chaos of striking colors and rough textures seems to push the old wood-frame house back down to the ground.

“Gone Fishing” takes us back to the forest with its many gurgling streams and winding footpaths. But this hyper-colorful longshot of thousands of acres of unspoiled wilderness does not bring to mind foggy mornings lazily daydreaming and waiting ever so patiently for a fish to bite. Instead, the picture seems to evoke a big, lonely, confusing place where we’ll feel a lot more lost than found.

Ms. Arnold cannot help startling us with variety. Among the new works — mostly paintings — is a color photo of one of her collages, the kind she has constructed for many years, employing pieces of her own photographs and other materials. “Queen of Spades” attacks the viewer with a phalanx of windows and frames. We feel a bit “boxed in.” But also unsettling us is the competition going on between two characters who each have a claim to be the “star” of the painting, the one true Queen of Spades.

It’s impossible to look at these pictures and hear “The Theme from ‘A Summer Place’” or Kenny G on soprano sax. The music the viewer hears might be tunes never heard before — which might be a nice surprise.