Gallery Sitka is thrilled to host two of our represented artists, Linda Cuccurullo and Marston Clough in a summer show, “Martha’s Vineyard Summer”. We invite you to come by and get your summer Island vibe on! Martha’s Vineyard is a favorite for gallery owner, Tamar Russell Brown and she wanted to bring a bit of the sea to mainland Massachusetts this summer. Gallery Sitka invites guests to make an appointment to see this show. The selected works will be on display from June 7 to July 31, 2021 in Gallery Sitka in Shirley, Mass. and on gallerysitka.com.

Book an Appointment to See the Show Marston Clough at his art reception, curated by Gallery Sitka, at The Bull Run. Photo by Lawrence Libby

My first art classes were at the Tisbury School in the early 1950’s and more than thirty years later I took a drawing course at the Massachusetts College of Art and loved it. I continued to draw something every day, for a year. Drawing still comes first for me and I generally have a sketchbook handy, making small sketches while riding the ferry, or around the docks in Vineyard Haven, where I grew up

I began taking a variety of courses at the Worcester Art Museum, experimenting with various media and techniques. I repeated etching and printmaking several times and bought an etching press. Etching was a logical combination of my drawing and my technical (teaching high school chemistry) interests. Monotypes, another printmaking process, allow looser, more spontaneous and more immediate results than etchings, woodcuts or linotypes.

After taking an oil painting class at the Worcester Art Museum – at that time my printmaking area was too cold to work in – I began working more in oils and this has become my primary medium, painting both real and imagined Island landscapes.

Although I do enjoy working outside, “en plein air”, most of my work is done in my studio on Martha’s Vineyard.

I find making art a challenge, so I am pleased when I like the result, more pleased if my wife likes it, or if someone verifies the result with a purchase.

I exhibit at MVAA Old Sculpin Gallery at the town wharf in Edgartown, at Featherstone Center for the Arts in Oak Bluffs, and at Art MV Gallery in Oak Bluffs, as well as Gallery Sitka in Shirley on the mainland.

Further examples may be seen at Rockfish Restaurant, and two are in the Permanent Collection at the Martha’s Vineyard Hospital.

I regularly donate art to fundraisers for causes and organizations that I support such as Windemere, MV Shellfish Group, Featherstone Center for the Arts, and the Chicken Alley Art Show. 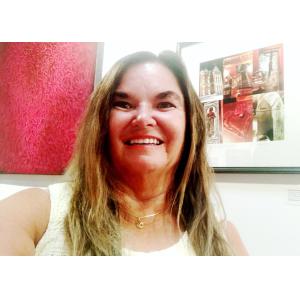 More than four decades ago Konica launched AUTOREFLEX — the first fully-automatic exposure control and metering through the lens (TTL) camera. That camera not only launched the “point and shoot” revolution of SLR accessibility for the masses, but — as Linda Cuccurullo’s first camera — it launched what would become for her a life-long love and passion for photography.

Since then, Linda’s award-winning photography has been exhibited extensively, including group shows at Gallery Sitka, Canvas Fine Arts, the Liberty Hotel, the Four Seasons Residences, Wheaton College and  the Artists’ Representative Art Gallery, in addition to over a dozen one-woman shows in the Cambridge and Boston areas, as well as Shirley, MA, and  Martha’s Vineyard.

She won an MIT photo contest award and her images have been published and reviewed in various newspapers, catalogues and other publications. Most recently her work has been featured in “It’s all about arts”, an online magazine covering local arts and culture in the Greater Boston area.

Her images primarily document the social and architectural milieus of many countries, including Italy, France, the United Kingdom, Mexico, and Indonesia. In her efforts to capture the essence of places, she has combined her passion for photography with a love of food, wine, and travel.

Linda holds a BA in German and Psychology from Wheaton College and a Master of Library and Information Science from Simmons College. She also studied at Harvard Extension, Boston Architectural College, MIT, and Orbitlingua in Orbetello, Italy.

Linda took a bartending class a number of years ago, and loved the idea of making cocktails which not only tasted amazing but were also visually stunning. The combination of this new love with her love of travel, and beautiful environments, resulted in her recent focus and passion for cocktail photography.

Other Coastal Works at Gallery Sitka