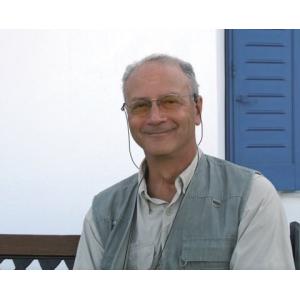 Roberto Perotti started painting in 1980. He graduated in Philosophy and became a psychologist and psychotherapist. Perotti is the author of two books regarding the theory and the practice of psychotherapy (“L’Incesto multiforme” 1985-Giuffrè; “L’Adulto Incompiuto” 1991-Edicart). He wrote the romance, “Ombre” 2004-Caroggio Editore, and the poetry book, “Noi due” co-written with Alessandra Lancellotti.

Roberto Perotti became interested in painting and initially learned with Oreste Bogliardi, who is one of the founders of abstract art in Italy. At that time, in the Tigullio region, the artistic and literary group composed of Bogliardi, the sculptor Cherchi, the writer Nino Palumbo, the painter and sculptor Franco Bagnasco, and others, was vital. Currently, he has been learning how to use enamel paint with artist Edoardo Krumm. Krumm is in fact extremely skillful and passionate about enamel paint which allows particular effects in mixture, which is impossible to obtain with other materials. Therefore, some art works created with the use of acrylics confer serenity to urban representations of the artistic period between 1997-2003.

Roberto Perotti is very creative not only in the scientific and literary area; he has always been a painter close to the style of abstract expressionism even as he has always added to it his personal trait which has changed according to the his diverse pictorial phases. He carefully chose and measured out his own expositions.

The intensity of his pictorial message can also be seen in the art works available on this web site. According to Perotti, art works must aim at making people dream, feel emotion and think.

Perotti makes a clear distinction between technique and creativity. He sees the first one as the hand made part of the art work; while the second one is seen as the essence of any type of work that according to its quality will be part of art history. The technique is the same ability that allows to falsify famous or less famous art works: in fact, it allows to copy them and not to create them. Therefore, the first aspect is handmade while the second one is art; certainly this clear distinction could be made if the creation has the dignity of art, which is something that rarely occurs.

Perotti goes through different phases, from pure abstraction to abstract expressionism, to action painting and in some of his art works to a partial use of the figurative. The figurative approach expressed through a partially formal and singular application of the action painting is remarkable.

He was selected from the art critic Germano Beringheli and in 2006 he was inserted inside the dictionary of the artists of Liguria. The definition “action painting”, also called abstract expressionism, represents an artistic flow of the second half of the twentieth century, whose main exponent is Jackson Pollock.

In this type of painting style, instinct prevails over rationality, even if this means that we are facing a chaotic and silly type of painting. There are two reasons for this. The first one is that the instinct has a structure that interacts with the rational part by compensating and equilibrating it. The second is that the progression of painting is directed by consciousness This results in an harmonious whole: it is a project more apparent than real.

The meaning of colours and shapes is the necessary prerogative to whom wants to dedicate his entire career or part of it to painting or to figurative arts. These skills certainly belong to Perotti and they allow him to express the sense of beauty and the balance of harmony. Reminding that even in the use of diversity there should be a global completeness. Perotti believes that “beauty cures” and he assigns the sense and the aim of his art work to the evocation of beauty. In the period of abstract expressionism, the paintings express strong emotions, an intense passion, sometimes anger and turmoil. However, there is always a chromatic balance.

Lately the phase of sequences of colours takes over, there is certainly a reference to the villages of Liguria. In this phase, intense and pure colours prevail even if they are alternated to “almost absence” of colour. This expresses the spiritual need of fullness and emptiness, of passion and of contemplation.

Almost at the end of the second millennium, the domes and the presence of temples of diverse origins appear in the sequences of stylized cities.This not only reflects the mixture of cultures and of people but it also shows the formal necessity to unite the pure linearity with the pure and full form like the one of the semi circle and the dome. Symbolic recalls and formal needs contribute to create one more suggestion in the painting of Perotti.

The expressive research increases with the insertion of an activity which is between sculpture and painting. The phase of metallic nets starts. They are folded and shaped as abstract but outstanding forms, they are covered with fluorescent paint and lightened with light of wood, in a way to create a very peculiar effect of forms and lights.

At last, the use of pictures’ enlargement. First, they are changed with the use of the computer and then they are transformed by direct painting intervention, using diverse materials and diverse painting techniques.