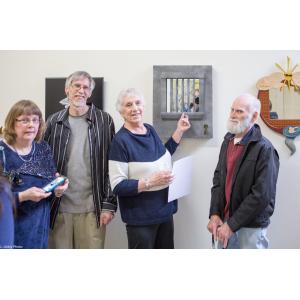 Luann Hume is seen here third from left with her husband Leon Hume. Leon Hume passed away during the summer of 2018. (David and Colette Smith are to her right.) This photo was taken by Lawrence Libby at this “Realities” show in Shirley, MA in February 2017.

Luann Hume painted her whole life. When she was three, her mother noticed Luann sketching with any writing instrument she could get her hands on. Thelma Townsend Booth, her mother, encouraged the young artist from the start. When she was nine, Luann spent many Saturdays taking the bus to Fitchburg Art Museum to take art classes. She had many joyful hours drawing and painting and beginning to learn her craft. “I prayed for more Saturdays in the month,” she says, “so that I could keep learning and creating.”

She feels very fortunate to have had a wonderful mentor in her high school art teacher, Mr. Munson. She refers to him as her “hero and savior.” Enthusiastic about her favorite school subject, she begged Mr. Munson to let her attend his class for the entire school day. He was happy to comply, “As long as I could pass the tests in my other classes,” she recalls. She managed to keep up in her other classes, which is quite a feat and inspiration to all young art students.

Landscapes and seascapes, captured during all seasons of the year, make up most of Ms. Humeʼs subject matter. She has painted nature scenes from all over New England. She worked primarily in watercolors and pastels, often on large sheets (30 by 40 inches) of high-quality paper. Her birch tree paintings have found homes in thousands of art lover residences all over the world. “They call me ʻthe birch tree lady,ʼ she once said, recalling the pieces that have distinguished her among New England artists.

Ms. Hume has been a leader in the arts community of the central Mass area for many years. She joined the Leominster Art Association at its founding in 1964. On Sundays, she taught painting at the Leominster Gallery where she taught, “men, women, older people, kids, everybody!” She was a member of many different arts organizations, including Maine Women in the Arts, the Princeton Arts Society, and the Pastel Society of America.

Ms. Hume lived and worked in Maine from about 1993 to 2013, residing in the town of Wells, but painted for a diverse audience in the seaside resort of Kennebunkport. Art lovers from all over the world came to this lovely coastal town, although there were some ups and downs with the number of visitors from year to year. “After 9/11, Kennebunkport practically closed down,” she recalls. For months many feared that terrorists would attack the town, since it was the residence of former President George H.W. Bush — father, of course, to then-commander-in-chief at the time of the attacks on New York and Washington.

The artistʼs work was displayed in venues, such as the Boulder Art Gallery in Fitchburg and the Richard Whitney Galleries in Wells, Maine. Luann Hume is no longer painting and lives in Fitchburg, MA.

Gallery Sitka Note: We are no longer carrying any of Luann Hume’s work, since mid-2019.