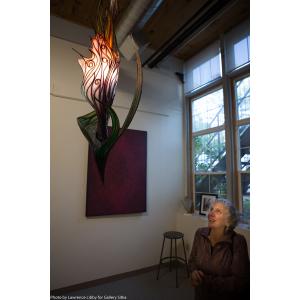 Born Nina Maneri in 1965 in Brooklyn, New York, I was fortunate to be raised by parents who were deeply involved in the avant-garde music and art scene of those times. To this day I am still feeling influence of the Abstract-Expressionist movement of my childhood and the heady, experimental atmosphere of the arts in New York City in the 1960’s and ’70s.

A lifelong photographer, I was given my first camera, a Kodak “Brownie,” when I was just seven years old. Since then, photography has been the strongest thread of the visual arts in my life.

I have been making music all my life. My first teacher was my father, who began my musical education when I was a toddler. I went on to major in Music at York College, City University of New York, from which I graduated with a B.A. in Music in 1977. At that time York was the newest CUNY campus in the city and had a very strong association with the jazz and contemporary music scene. Nor did I neglect arts and letters: I was manager of the Erotic Arts Book Society, one of the divisions of Ralph Ginsburg’s publishing empire, during the mid-1970’s. I worked in book manufacturing at Haddon Craftsmen. Through it all, I continued practicing music and taking photos.

In 1980 I moved to Boston, where I worked in the Extension/Prep Division of the New England Conservatory. There I met my future husband, guitarist Lous Arnold. (We pronounce his name as the French say it, so it comes out sounding like “Louie.”) We eventually left the Boston area and moved to Lunenburg, Mass. in 1985, where we raised two children in the home where we still live.

I have been involved in many of the cultural innovations in the Central Mass. area. For many years I had a thriving piano teaching business in my home studio. I sometimes performed music as a singer and piano player in the jazz idiom. I wrote concert reviews for our local paper, the Fitchburg Sentinel & Enterprise.

My journey to mixed media art began about ten years ago when I was inspired to make images by creating collage, cutting and pasting my photos into other images. I began by repurposing prints of my photos that didn’t quite work on their own but brought out interesting ideas when pasted into collage. I then began using all kinds of paper – tissues, old road maps, discarded wrapping paper, newsprint of Chinese-language papers – as well as textiles, stamps, and all sorts of found-art materials. I use fibers, paint, pastels, alcohol ink, and other sources of color and texture that come together to create different worlds. An underlying intention of the work is to prompt a response from the viewer, to draw out a personal story. My aim is not to push my visual agenda, but instead to awaken stories within the viewer, to call forth their own stories, memories and feelings. I thus create many stories rather than just one.

For inspiration, I turn to nature, religious iconography, and fairy tales. I am drawn to many different archetypes – those images and ideas that Carl Jung described as instinctive impressions that spring from the collective unconscious. Jung saw them as patterns common to all human cultures and all individual psyches. They lie dormant within us, as it were. They are only potential – unconscious – but enter consciousness as images or behaviors when they interact with the outside world.

The work continues to evolve as I explore using a variety of different paints. Most recently I began working in casein, gouache and acrylic. I love painting landscapes, and recently I have been working on a series of abstract bucolic scenes. As a developing artist, I am moving in new directions as I explore color, shape and texture. Photography continues to be a major passion.

In my search for a steady paycheck, I earned a Master’s degree in Counseling from Fitchburg State College in 1997. I work a wonderfully interesting day job as a high school counselor. I am challenged and inspired by the spirit and complexities of the teenage psyche.

Louis and I are grandparents now – four boys – and we continue to be fascinated and surprised by all the young people in our lives.