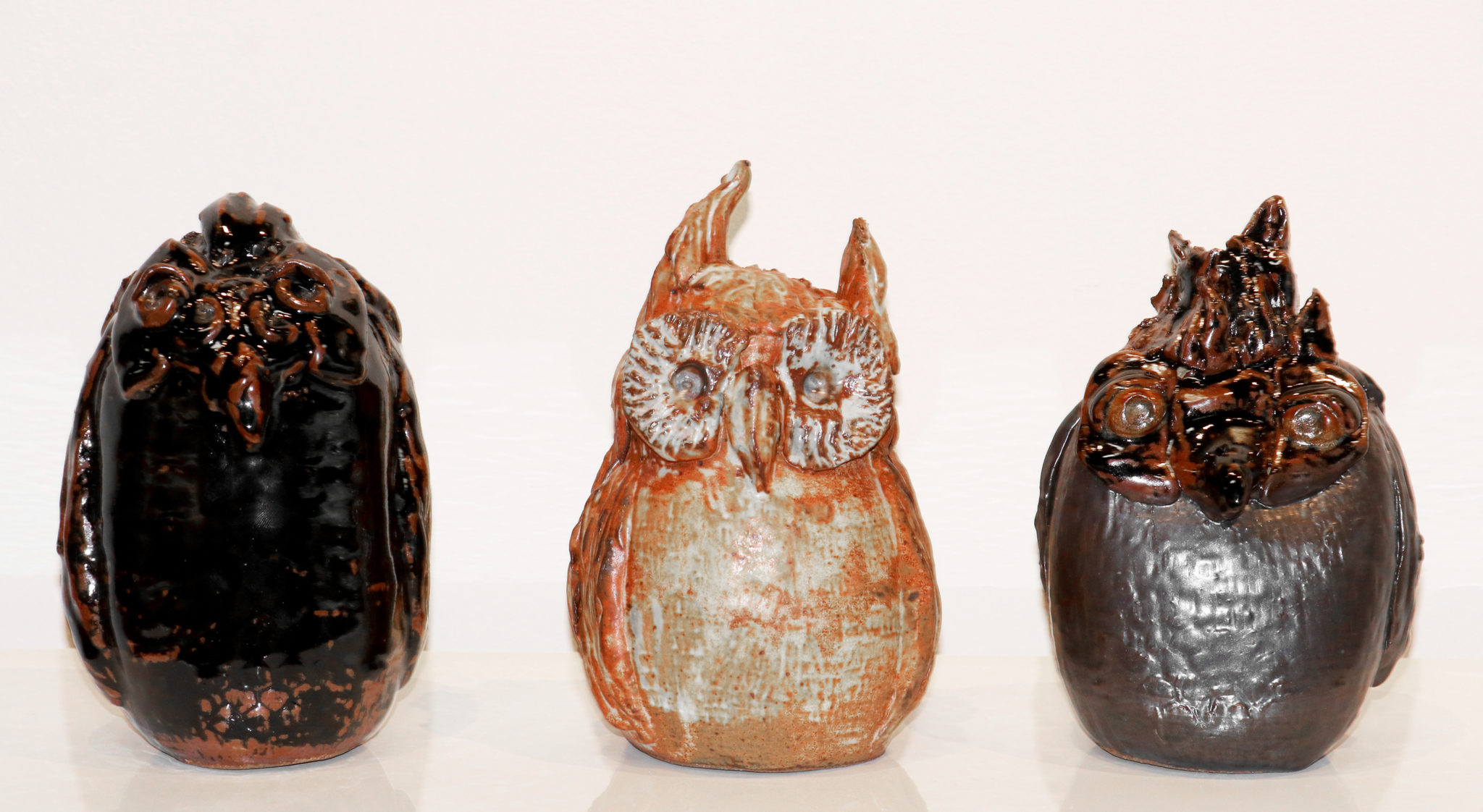 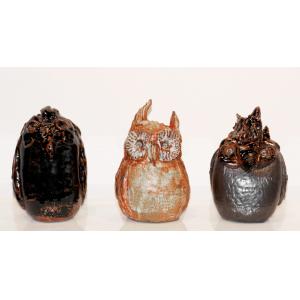 “Love Letters Written in Stone”: Exhibit to Display Loving Concern for Our

FITCHBURG, Mass. — Colette Shumate-Smith will show area art lovers a remarkable display of versatility at Gallery Sitka in Fitchburg beginning on April 7. The artist is a painter and a master in ceramics, the “stone” portion of the exhibition. All the works will sing the praises of Mother Nature on Earth Day. The show celebrates the beauty of the natural world as spring comes to Central Mass. But it’s also about reminding everyone of how precious and irreplaceable our little planet really is.

“Art is my lifeline, my spine, it makes me whole,” says Ms. Smith. “It holds me up and keeps me going.” The artwork is the proof of this statement. The artist will be showing a number of large canvases (as big as 40 inches square) and many pieces in ceramic, as well as sculpture constructed from an exuberant variety of materials.

Earth Day is traditionally April 22, ever since it was inaugurated in 1970. But the spirit of that special day will be celebrated through most of April and May at Gallery Sitka. Ms. Smith will be calling us out to defend the Earth against the callous and destructive tendencies of some of our fellow Earth-tenants. “Themes of my current work are air, water, landscape, and our biosphere in battle against the machine…” she says. This dedication to her environment is part and parcel of her working methods, developed over many years.

Ms. Smith loves the ocean and the creatures that live there. In one of her canvases, “Ecosystem,” a very large squid frolics not far from a somewhat smaller animal of the deep, a sea turtle. They seem to be co-existing very peaceably. Interestingly, the entire image looks like a cross-section, with the scene below the surface of the water reminding us somewhat of what we’d see behind the glass at the aquarium — until we see, near the top, the sun-drenched beach, with a rough fence dividing the sandy part from, say, the parking lot or the road or a grassy stretch just out of view.

Another seascape, “Tree with a View,” offers us a tree in the foreground, shorn of all its leaves, but cropped at the top by the frame so that we might well be missing some leafy spots just outside of the shot. The sea in the background is a deep, dark blue, but very strangely is streaked with reddish-brown, green, and yellow. These are not unusual colors to see in a lake or in the ocean — the green could be seaweed or other aquatic plants, the yellow could be sunlight glinting off the waves — but their size and intensity seems expressionistic, coming to us by way of the artist’s interpretation, indeed through some strong emotion or intuition that would not be detected by the camera or by paints applied for a super-realistic effect. The colors are so strikingly beautiful that the viewer might not want to jump into that water for fear of disrupting or spoiling it somehow.

Some of the pictures do feature human figures. In one, “Nature’s Son,” the figure is a young man, perhaps a teenaged boy. He may be a student, and an industrious one, since he carries a walking stick in one hand and a book in the other. The walking stick could be a large branch with the bark stripped off, or perhaps it is a stake with markings or notches at regular intervals. There is also some unintelligible writing in proper cursive jumping out of the yellow-green straw in the background, improbably enough. Wildness and civilization seem to overlap in Ms. Smith’s natural world.

“Look to the Future” presents two young women, one in ponytails, the other with short, dark hair. We’d be hard-pressed to say much else about them, because we cannot see their faces. They are turned away, ignoring us, looking out at a startling blue ocean again. But there, in the distance, coming right out of the waves, are some short but significant words written in very elegant cursive. In that writing we can make out the phrase “I love you” over and over again. Who is speaking those three words? Or are they only thought but remain unspoken?

One painting is especially relevant to the occasion of Earth Day and the bright spring green of April: “Don’t Throw It Away.” We see an enormous hand grasping, or perhaps just letting go of, a variegated green sphere. Can this be the Earth? The photos of the Earth from space always show our planet to be darkish blue — the color of our oceans, which cover most of the Earth’s surface — streaked with immense blotches of white, the clouds swirling above us. But the artist has chosen to make this Earth green, dark in some limited areas and light everywhere else, even betraying streaks of yellow. Contemporary English uses the word “green” to denote a reverence for the unspoiled wilderness, even a political commitment to the environment and long-term plans to save our planet — and ourselves — from destruction.

Curiously, darkish blue does make a dominating appearance in the background surrounding the hand and the green world in (or just out of) its grasp. This is a seascape in blue, with the ocean stretching to the horizon. But this field of color rises up into a set of pointy peaks on the horizon — “purple mountains’ majesty,” as it were, though they seem to be closer to indigo than to purple. Below the green sphere, apparently at the wrist connected to the outstretched fingers of the gigantic hand, there seems to be a cuff of white muslin. This might be a clue to the identity of the human being “throwing away” the Earth. Since the fingers are quite large and thick, we can surmise this is a man’s hand. But the cuff of a white shirt also might indicate that the person also wears a white collar. Is this the hand of a grasping millionaire? Or could it be the hand of another kind of white-collar professional — say, a tweedy professor of environmental science? Is the hand recklessly throwing our precious Earth away, as if it were simply a disposable by-product of some manufacturing process meant to pile up profits? Or is the hand trying to pile up riches in the hereafter by doing the epic good deed of reaching out to the Earth, to gather it in and care for it as the sublime, beautiful home not just of humanity but of all our kindred species of plants and animals?

Ms. Smith is just as much at home with ceramics and sculpture as she is with oil paint and acrylics on canvas. “Recyclemania!” is a sculpture made from various media, including aluminum soda cans and laminated juice pouches. The recycled cans, pounded flat, drape the legs, arms, and shoulders of a little girl whose head is made of (yes) recycled Styrofoam and whose long mane of hair is a brilliant Sunday-morning-comics yellow made of spray-on foam insulation. Colette seems to be challenging her fellow artists to use these same kinds of materials as grist for the artistic mill, rather than letting these disposables simply go into landfill.

Another startlingly original sculpture is “On the Rocks,” a full-figure portrait of a polar bear in ceramic. The bear is composed of plates of ceramic curved like large side-sections of pipe. Her (or his) immense white body is immediately recognizable as that enormous animal most of us have never seen in the wild, but the figure is not filled out. Rather, the curved ceramic plates join together, one jutting out to the left, another to the right, then left again, suggesting the undulating trunk of one of the biggest but also one of the most agile creatures on Earth. The bear seems content to simply look out to sea and contemplate her (or his) cold and lonely hunting grounds — or to leap into action to catch a fish or two in one fast lunge into the near-freezing water.

Like any ceramic artist, Colette uses the kiln to turn moist clay into hard “stone,” and to turn the drab colors of pre-firing glaze into the shimmering colors we see on the finished product. But the daring Ms. Smith also uses a method called “pit firing,” whereby the artwork is not so much baked, as it is in the kiln, but simply burned by the fire directly, seeming to be devoured by flames that create striking colors on the ceramic once the fire has burned itself out. The artist enjoys experimenting and taking chances. “It is through this faith in the future of the vision, and your belief in the impossible,” she explains, “that a creative artist brings a work of art into reality.”

The opening will take place on Saturday, April 7, 2 – 4 p.m., at Gallery Sitka West, 454 Main St., in Fitchburg, Mass. Adventurous art lovers will want to visit gallerysitka.com and justrightaline.com to learn more about the remarkable artwork of Colette Shumate-Smith. This show will be on display until May 26.