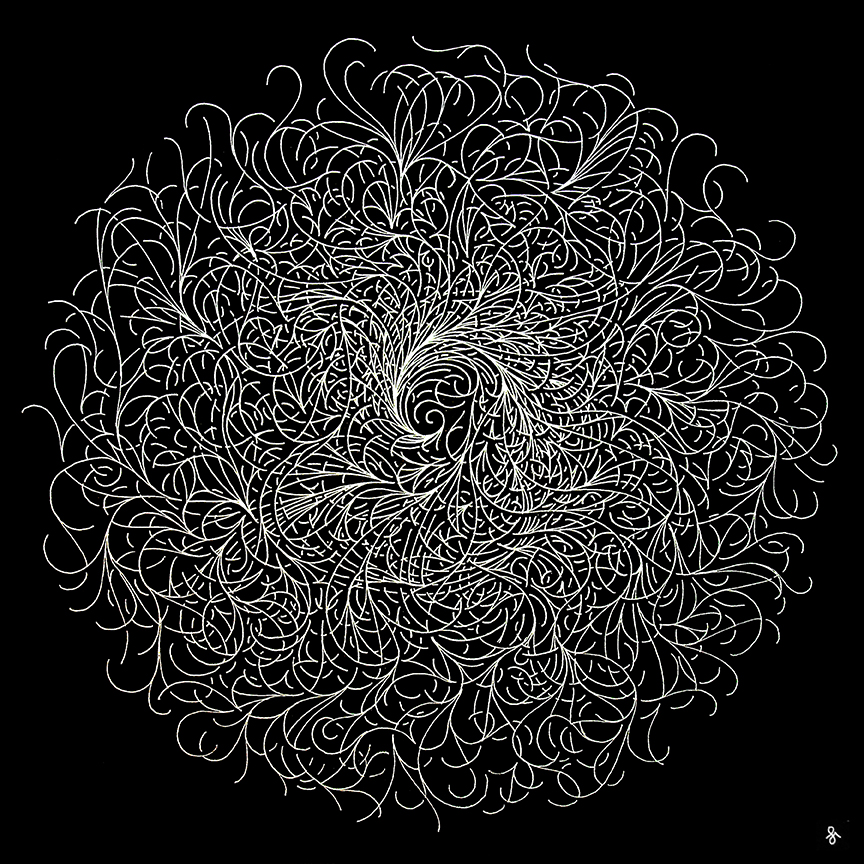 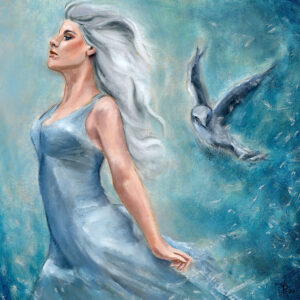 Certain that “humanity is in a dark place” at this time, Melissa A. Richard is projecting a message of hope and beauty for art lovers in New England. She provides her own artwork and curates that of six other artists in an online exhibition entitled “Glimmer on the Horizon,” which begins Friday, Nov. 6, originating from Gallery Sitka in Shirley, Mass.

“Tamar wanted to point things in a positive direction,” says Ms. Richard, referring to Gallery Sitka owner Tamar Russell Brown. Finalists for this show will be selected after the Nov. 1 deadline. The theme of hopeful signs on the horizon recalls the sentiment expressed by the verse, “His eye is on the sparrow,” a theme that has inspired many songwriters. That is, the small fragments of light are figuratively brave attempts of artists to dispel the darkness of hard times with their hopeful vision of tomorrow. Appropriately, Ms. Richard will select diminutive pieces no bigger than 11 by 14 inches. Melissa’s own pieces will reach even further into this theme. Her paintings—employing such strategies as work on paper and collage and such materials as acrylic and wax—will pack an artistic punch and concentration into paintings no larger than four by four (again, that’s inches). Such pieces are likely to give us confidence, as when we see the humblest creatures leading the way to a supreme challenge and calling on others to follow.

Ms. Richard’s three paintings for the show are of a piece. Each one is a rich mixture of dark blue and a very subtle green, with dashes of white wax here and there. The blue—really indigo, and a very dark, foreboding one at that—dominates the three pictures. That field of indigo is indeed dark and troubling, but one cannot say for certain whether the atmosphere is getting bleaker and closer to some terrible, destructive end…or whether instead our fortunes have gone as deep into the terrifying depths as they are going to go and there’s nowhere to go but up. It doesn’t seem hopeless, really. In fact, it seems to call on the viewer to take charge of the situation and turn things around.

The indigo of “Glimmer1” is the scariest one of the three. At its core, it is simply black. The colors of “Glimmer2,” however, are more suffused with white and that persistent aqua-green. “Glimmer3” seems to be tearing itself apart, with white streaks that seem to be clawing at the canvas, as if the energy of the picture is trying to escape some awful fate. Again, strangely, it seems hopeful. There seems to be an urgency, a will to set things right, or at least to try to escape the worst aspects of that darkness. In its violence, it seems to dare the viewer to do something, anything, and thereby to give us a chance to pull out of that frightening—but very beautiful—sea of black and indigo.

Angelique Luro is one of the artists already signed on for the show, in which she will exhibit some startling abstract expressionist works. “Growing Season” is a calming blend of white and spring green, depicting life pushing through the snows of winter and unstoppably reclaiming the Earth—at least for the warmer, gentler time of the summer months. “Edge of Light, 2019” also makes liberal use of white, but without calling anything concrete to mind. Pure color is at play here, with warm, delicate fields of yellow and red demanding recognition. Even benign disks of sky blue wink at the viewer and seem to reassure us that they will grow and grow and take over the canvas as time goes on. “Walking Home” does call the concrete to mind in the form of a small town’s worth of figures, some walking away from us, some walking toward us. Perhaps it is the viewer who is walking home and taking note of many other individuals who are engaged in the same activity. We could see them as members of the same immense family, or as strangers whom we will most likely never see again. The experience is simultaneously comforting and a little threatening for the viewer, who may want to accept all these neighbors into her life or forever shut them out.

Carolyn Todd is also a creator of abstract images, but her colors are not so much playing with each other as trying to upstage each other. “The Orangutan” looks nothing like that particular primate, but the sunny orange virtually jumps off the canvas at us. “Collection, 2020” could be interpreted as an oceanside vista, with what may be enormous sand dunes confronting us in the foreground. Far in the background, where we might expect to find dark blue, instead, we come upon a striking dark green—not the “sea of green” we remember from the song, but a strange creature that jumps up off the horizon. What we might at first perceive to be a band of blue stretching out to infinity rears up like an animal, but an impossible one. We’re suddenly lost in a dream world, but not an especially comforting one. It seems to be a bit out of control, out of sorts, and perhaps determined to do anything except what we might be expecting it to do. “The Shore” is virtually all foreground. Instead of offering us that calm, pacific scene of the big, mysterious ocean, we find ourselves looking at a terrifying, roaring mass of white water just a second before it comes crashing down on us.

Prospective buyers can call Tamar Russell Brown at 978.425.6290 to schedule a time to view one or more of the paintings “live”—that is, at the gallery at 2 Shaker Road, D101, in Shirley. Of course, everyone is invited to visit gallerysitka.com/glimmer on November 6 to see the entire show online.